Get a nice COVER or POSTCARD from PORTUGAL....

2 EUROS
per COVER or POSTCARD

I can send you a nice surprise cover or postcard to your home address.

You can pay by paypal or cash in an envelope. 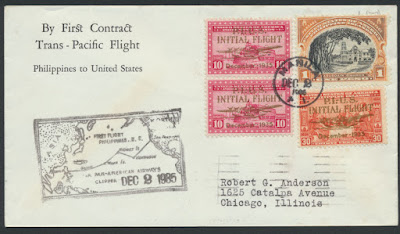 Having just spent 8 hours flying Sydney Manila (about 6200 miles) I thought I would put the journey time into perspective and show this cover for the flight from Manila to San Francisco (8200 miles) which was with stops at Guam, Wake Island, Midway Island and Honolulu before reaching San Francisco, a journey time of about 6 days and with 60 hours flying time or there abouts, compared to about 12 hours today, in one flight. This was Pan Am’s Martin M-130 flying boat, better known as the China Clipper. The cover shows the special stamps issued by the Philippines Post Office; the 10c Fort Santiago stamp and the 30c Blood Compact issue with overprint PI – US Initial Flight December 1935. There was a special cachet, as shown on the left hand side of the cover, for mail carried on the flight from Manila to San Francisco, and this was on 74,719 pieces of mail. Enjoy your flying and your stamps. Michael cddstamps.com Posted by michaelatcddstamps at 9:28 AM

PLEASE express yourself by COMMENTING!!!

Search my Blog with Google